Abstract tests will almost always be a part of your assessment. They are classics and they have the advantage that language problems are not relevant. Even though you will not have to solve figures in your work, the capacity that is measured is relevant for many positions. After all, separating primary and secondary issues is important for many functions.

The number of figures that make up a figure problem may differ. The following sample exercises consist of ten figures. The first four figures are all the same in a certain respect (the problem figures) and two of the bottom six figures (the answer options) match with the top four figures. They have one or more things in common.

Take a look at example 1 below. The top four figures are all square. Of the bottom six figures, only (a) and (f) are also square. Squares are the common element in this problem. You could say that the shape of the figures provides the solution here. Try to solve examples 2 and 3. First, look at the top four figures. Look for the way in which they are the same and try to pick the TWO other figures from the bottom six figures. 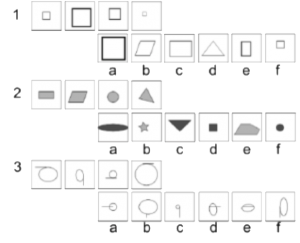 The top four figures all consist of a round/oval shape touched by a straight line. The line segment does not pass through the circle/oval. This is also the case with (c) and (f). These are the correct answers.

As you can see, the common elements of the problems can be shown in various ways. You will find that with a little creativity you can think of many common traits. A good exercise is to create a figure assignment yourself. Below are some characteristics that are important to look at in figures, so that you can quickly select the right answers. If you have too many choices, you know that this is not the unique characteristic, because only two answer options remain. Take a good look at the traits below in order to become familiar with the different types of common characteristics.

An important mistake that you can make with this test is looking for a certain movement or sequence. A number series is all about sequences, but this type of problem is about specific common traits. The challenge here is to look at the big picture. By becoming familiar with the possible shared traits mentioned above, you are less distracted by the “noise” and irrelevant, misleading figures. If you look at the common elements, you will see the following in the four squares provided in the problem below:

The above observations lead to two correct answers and because you clearly understand the rules that apply, you can also effectively argue why the other options are not correct.

E and F are the correct answers when you consider what the figures have in common. You can see that the test engineer still has a lot of options when creating different problems, e.g. by varying the shape of the star.

It is very important to practice for a capacity test. If you do not practice, your score may be lower and this often decreases your chances of getting that much-desired job! By practicing, you can solve problems more quickly and efficiently, so that your score will increase.

Get started immediately with exercises for figures and many other tests on:
Add to cart €14,95

All aptitude tests
Add packages to cart
Go to Top